Cardiac Catheterization Feat at the Clinics 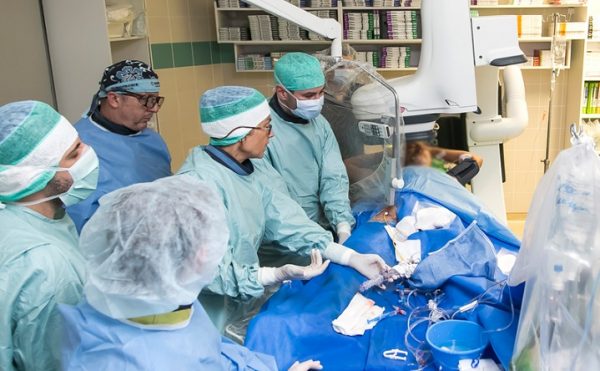 In Hungary, treating pulmonary artery stenosis by using balloon angioplasty was carried out for the first time ever at the University of Debrecen. On Saturday, an international team of physicians used this method in the Clinical Center on two patients in order to decrease hypertension in their pulmo

Serious shortness of breath, reduced exercise capacity, fatigue from even minor physical activity, and even fainting may be caused by CTEPH (chronic thromboembolic pulmonary hypertension). A special method of treating this condition, called balloon pulmonary angioplasty (BPA), is already widespread in Europe, except it had never been used in Hungary before. This complex catheter-based intervention was completed for the first time in our country on July 15, 2017, at the Clinical Center of the University of Debrecen on a male (59) and a female (82) patient by physicians of Allgemeines Krankenhaus (AKH) of Vienna with the assistance of the medical staff of Kardiológiai és Szívsebészeti Klinika [Department of Cardiology and Cardiac Surgery].

CTEPH is usually triggered in patients who have been through pulmonary embolism. In most of the cases, the emboli are dissolved in the blood but, in almost four percent of these instances, they clog the arteries in the lungs to an extent that causes hypertension. Blood pressure in pulmonary arteries is normally one-fifth of systemic blood pressure (which is 120/80 Hgmm). Nevertheless, in these cases, pressure in pulmonary arteries can sometimes be as high as, or even higher than, mean systemic blood pressure, thus resulting in what is called hypertension.

Basically, the chronic disease can be treated in three different ways. If the clots are located in the larger arteries, these can be cleaned through a surgical procedure. The geographically closest availability of this kind of surgery to us is in Vienna. However, if the emboli clog small blood vessels, which surgeons cannot routinely access and operate on, the solution can be BPA. The third possibility can be a medical treatment of taking drugs, but this is not very effective on its own in most cases of CTEPH. The objective of the BPA procedure is to use balloons to dilate the clotted vessel sections that block the proper blood flow and circulation in the lungs so as to decrease the pressure in pulmonary blood vessels and, consequently, alleviate the hypertensive heart condition.

During the successful intervention conducted by the international panel of physicians in the Cardiac Catheterization Laboratory of the Department of Cardiology and Cardiac Surgery of the University of Debrecen, the catheter was first inserted into a central vein, and the devices otherwise traditionally used for dilating coronary arteries were tunneled through this passage. In the course of the intervention, which normally takes 2 to 3 hours, a special thin wire was driven through the clot and it was dilated with the help of an inflatable balloon of 1.5-7 mm diameter.

This historic first BPA intervention was accomplished by Professor Irene Lang, Head of the Division of Internal Medicine II and Cardiology of AKH, Vienna, and her former student, Christian Gerges, with the assistance of interventional cardiologists from the Department of Cardiology and Cardiac Surgery of the University of Debrecen. Both of these Viennese doctors had learned the ropes of this complex catheter-based procedure, which requires a great deal of expertise and patience, from Japanese specialist Hiromi Matsubara. Members of the Debrecen medical assistance team included Tibor Szűk, László Balogh, Andrea Péter, Andrea Daragó, and Bertalan Kracskó, together with Róza Szobonya, Zoltánné Sallai, Ilona Örvendi and Zsigmond Nagy. The method used this time had been applied for the first time in the world in 1988, but the examination results of the first larger test group of patients were published only in 2001. The procedure has been perfected primarily in Japan from 2004 onwards, and it has spread more and more widely since, both in the USA and Norway and, recently, in the rest of Europe as well.

The Debrecen team members are confident that this procedure could sooner or later become an established routine treatment available at the University of Debrecen and in other institutions in Hungary with the help of Professor Lang and her colleagues, assisted by the physicians working at the Clinical Center. They believe that a BPA intervention can bring about significant changes in the quality of life of patients, who usually experience that the post-operation amounts of symptoms, like shortness of breath, decrease, while their physical exercise capacity increases. A great advantage of this method is the brevity of time required for recuperation: after a two-day intensive post-op care, patients may leave hospital premises as early as the third day. The patients who have undergone the first ever balloon pulmonary angioplasty in Hungary are fine, and they were officially released from the clinics on Tuesday.