A Meeting of Particle Physicists 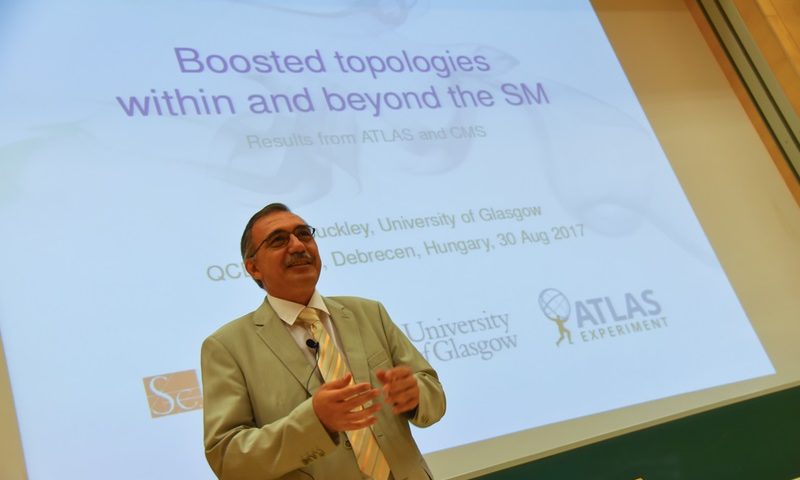 Experts of particle physics are to discuss recent findings in theoretical and experimental research related to LHC (large hadron collider) at the QCD@LHC 2017 conference, which is this year’s Debrecen University Symposium.

“Every year, the University of Debrecen provides financial support to a prestigious international conference hosted by the representatives of one of the outstanding scientific fields cultivated in our institution. When we look at the work and achievements of Debrecen’s physicists and specifically those of the Particle Physics Research Group, it is easy to see why the choice proposed by the Academic Committee this year was the conference QCD@LHC 2017, said László Csernoch, Vice Rector for Academic Affairs, at the official opening of the conference on Wednesday.

The Vice Rector had also graduated and started working as a physicist and it was only later that he started to lean towards life sciences, so he is in touch with only very special fields of physics today. His academic career is also an indication of how important it is for researchers to be open towards research areas other than their own.

Zoltán Trócsányi, Head of the hosting Particle Physics Research Group and of Természettudományi és Technológiai Kar Kísérleti Fizikai Tanszéke [Department of Experimental Physics of the Faculty of Science and Technology], underlined in his welcoming address that this is the first time that a conference on physics is nominated for the title of   Debrecen University Symposium.

“When I was a freshman at the university, there were not any researchers in Debrecen specializing in particle physics whatsoever. As a comparison, we have experienced a significant level of developments in this respect during the course of the past couple of decades and we are very happy to be able to host conferences like this present one,” said Zoltán Trócsányi.

Between August 28 and September 1, there are going to be as many as 80 papers given at the meeting by particle physicists from all over the world. The aim of the event is to provide a forum for experts conducting theoretical and practical research in collider physics related to the LHC, as well as to exchange experience and to foster discussions and collaboration between experimenters and theorists in order to discuss open problems with one another.